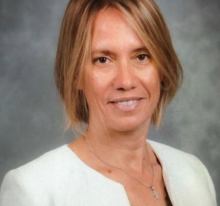 Mrs Evi Papantoniou is Deputy Director for Space and the Head of the Space Policy Unit in the European Commission - Directorate-General for Defence Industry and Space (DEFIS). She is responsible for actions supporting the aerospace ecosystem, as well as for relations with the European Space Agency and the EU Space Programme Agency. Until December 2019, she was the Head of Unit in the Directorate-General for the Internal Market, Industry, Entrepreneurship and SMEs (DG GROW) - responsible for legal and inter-institutional aspects of Galileo & Egnos, the EU satellite navigation programmes. Previously, she contributed in setting-up the EU Defence Fund and dealt with the EU response on countering hybrid threats.
She also worked in European Commission Task Force for Greece, assisting the Greek Government in implementing structural reforms in the area of business environment and justice reform.
As competition lawyer by training, she worked for several years in DG Competition, on competition enforcement in anti-trust, but also state aid control.
Before joining the European Commission, she worked in the European Court of Justice in Luxembourg and as a competition lawyer in Paris.
She holds a Master of Laws (LLM) in EU law from the College of Europe in Bruges.