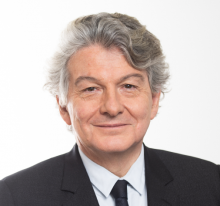 Thierry Breton ran several companies and served as CEO at Bull, Thomson Multimédia and France Télécom. From 2005 to 2007, he served as French Minister of Economy, Finance, and Industry before joining Harvard Business School as a Professor. In 2009, he became CEO at Atos, a function he held until 2019 when he became the European Commissioner for Internal Market. His portfolio includes industry, goods and services, digital, defence, space, tourism and audio-visual topics.