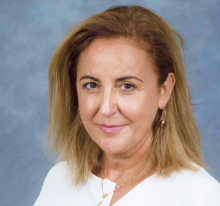 Ms Kavvada joined the European Commission, in Brussels, in 1997 and worked initially in the Research Framework Programmes. Subsequently, as from 2000 her main service at the Commisssion related to space, in particular the European flagship Satellite Navigation Programmes Galileo and EGNOS (Head of Unit from 2011 to 2019 at DG GROW). Currently the mandate of Ms Kavvada at the Directorate ‘Innovation and Outreach’ at DG DEFIS comprises new space initiatives with prevalent resilience and security features, space data management policy with reinforced European credentials, mainstreaming of the European New Space as a vector for society and economy, space research, synergies between space and defence industry, and international relations and communication for the whole of DG DEFIS.